Since 2017 Decoder is the ensemble in residence for the Elbphilharmonie Hamburg’s „Unterdeck“ concert series.  For every Unterdeck performance we invite different artists to curate the evening with us.  In the 2019/2020 concert season the Unterdeck series will begin its third year with performances curated by Michael Beil, Trond Reinholdtsen, and Popebama (Erin Rogers and Dennis Sullivan).

Read an article about our concert series „Unterdeck“ at the Elbphilharmonie Hamburg here (or in German here).

(if you are not seeing the English subtitles, please click on the CC icon to turn subtitles on, then click on the settings icon to change the language to English)

#AsPresentAsPossible – an homage to the “Bang”!  With a glimpse from the Elbphilharmonie, the Decoder Ensemble and Brigitta Muntendorf invite all to a transmedia happening, where the significance of corporal presence intertwines with concepts of physical and virtual existence in the events occupying all areas of the concert room.  With the music of Michael Beil​, Jessie Marino​, Brigitta Muntendorf (WP), Fat Boy Slim, Josh Spear and interludes drawing upon the Youtube/street musicians “Too Many Zooz”, #AsPresentAsPossible is constantly exploring the space between music, theater, and video amidst real and virtual “thereness”.  Through the collaboration with the choreographer Miriam Heinrich Horwitz​, one witnesses how the Decoder Ensemble encounters a new side of performance culture.  Here, physicality and reality, and the perception of those, confronts the musical interpretation.  How present can we, and do we want to be?  When do we transcend into presence through the very mediums that should make us invisible?

Poet and spoken-word performer Nora Gomringer, who won the Ingeborg Bachmann Prize in 2015, stands for the spoken word in verse like hardly any other contemporary author. In this programme, she enters into a dialogue with the musicians of the Decoder Ensemble and evolves a conversation in the realm between word and sound: lively, dynamic, tongue-in-cheek and perfectly suited even to people who can’t stand poetry!

Centred around three new ensemble-specific versions of the video work “Run Time Error”, Steen-Andersen weaves together a staged concert event, combining music, video, light and performance. „Run Time Error“, „Asthma“, Steen-Andersen’s most recent piece, and excerpts from his music theatre work “If This Then That And Now What” offer alternative perspectives on everyday objects and activities like walking and running, opening and closing doors as well as exploring rube-goldberg-contraptions, ritualistic repetitions and found film footage. This builds a natural bridge to two ‘classic’ video works by Martin Arnold (“Pièce Touché”, 1989) and Fischli/Weiss (“Lauf der Dinge / The Way Things Go”, 1987), where similar elements play a central role and which could be seen as predecessors to a work like “Run Time Error”.

Entity describes the existent, the existing, a thing, the essence of an object, the element necessary for its identity. The entity takes place, it is complete, it needs neither a name nor a label to be visible or define itself. It can be a vague idea or a concrete idea.

This evening we are looking for the entities of the musicians, the audience, the lobby, and the hall. The instruments, the architecture, the body and also the music, the expression are equally at the center of the inquiry. The heterogeneity of the entities is not an obstacle, but on the contrary highlighting it is the goal of the evening. Attempting to meet in diversity is the challenge. 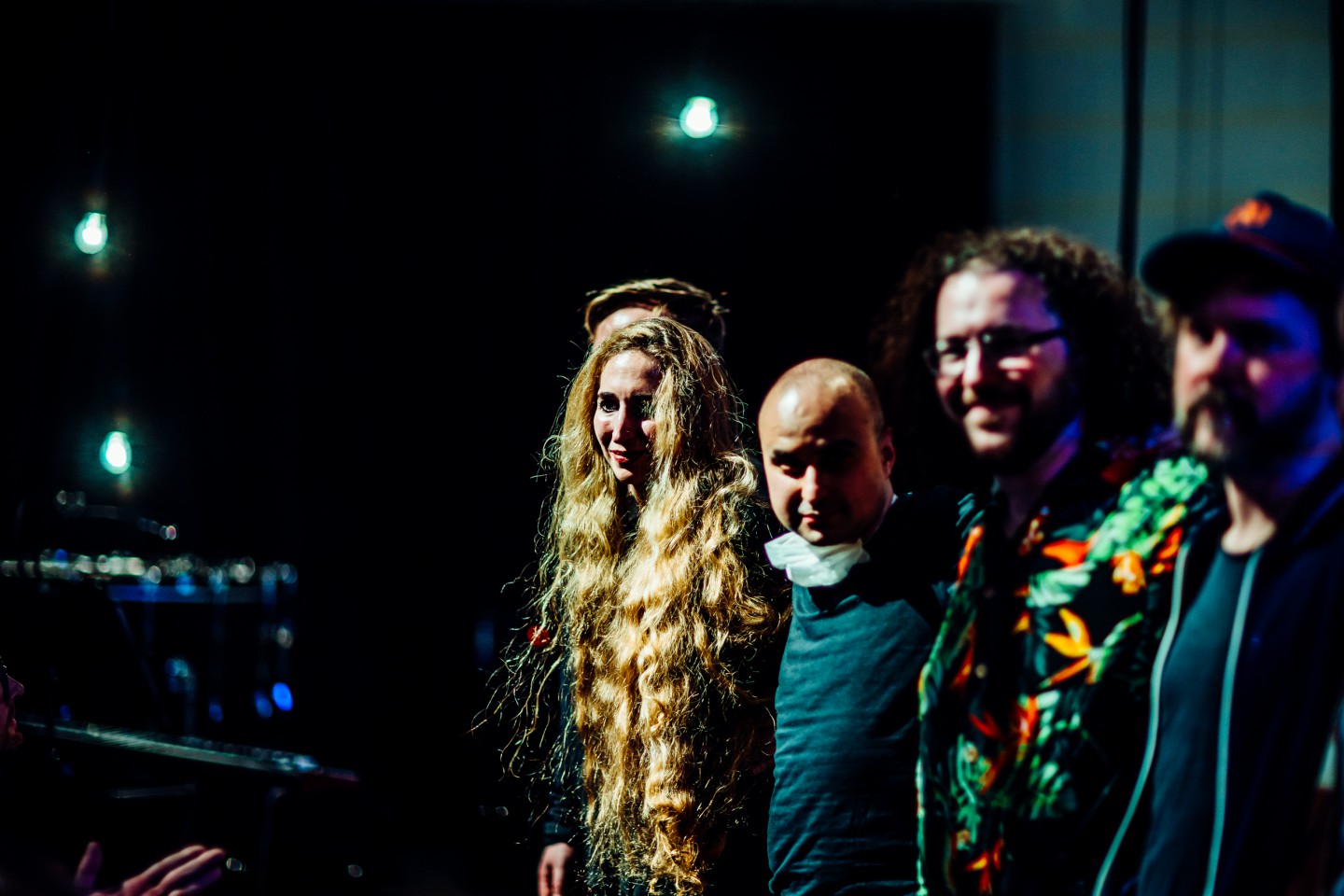 Composer Sarah Nemtsov (b. 1980) impresses with her unique, sensitively sounded-out set-ups in which her highly complex music occupies a space worlds away from familiar interpretative patterns. In terms of subject matter, Nemtsov deals with existential questions of existence and the vivid expression of extreme life experiences. Working with the Decoder Ensemble, the composer sets off in search of appropriate forms in which to depict human fates in sound.

CUTTING-PATTERNS
A corn field, in the background, train tracks. A man enters the picture and looks at the audience, a train rushing by. Cut. Four mixing consoles pulsate in self-oscillation. Cut. The sounds and movements of the cello break up into a kaleidoscope of velocities a hit is dissected to the very basics of its suppressed excess, cut through the middle, interrupted by a strobe-lit, distant approximation of an icon. Cut.
In the evening curated by the filmmaker Daniel Kötter and the composer Hannes Seidl, the Decoder Ensemble plays volatile, interruptive, with hard contrasts and slight shifts.
Cutting between seeing and hearing, concert and cinema, inside and outside, approach and distance. Cut 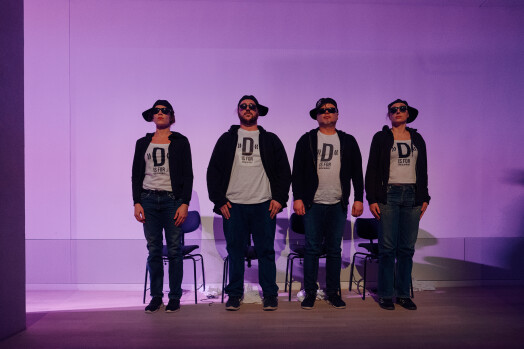 … and nothing to get hung about. From the Beatles, meaning: Nothing is real, but nothing to worry about. This song is actually about an orphanage in Liverpool called Strawberry Fields, but it is quite likely also about experiences with LSD. Today, half a century later, we no longer need drugs to remain calm in the face of the absence of reality. Concern about the loss of nature and reality has subsided. The artificial has been celebrated in art for decades and that is now also being felt in society. 20 years ago I was asked about the need for video in a concert context. Today we see more on video than live in normal life and it dawns on us that reality, authenticity and nature are only human inventions. And now reality is increasingly being replaced. In many contexts, video has become the visual norm for experience. But don’t worry.

In this program with the Decoder Ensemble, there are five compositions to see. They are works in which video is conceptually interwoven with music. In every piece there is a new aspect of the composition of sound and image. The videos are not explanatory, but rather clarifying. You could almost say that contemporary music has now arrived where the Beatles were in 1967. Not long after Strawberry Fields was published, Helmut Lachenmann was still postulating: »To compose means to think about music«. But even then it could have been and today it should mean: composing means thinking about the context of the concert. There is a lot more besides music. And nothing is real. 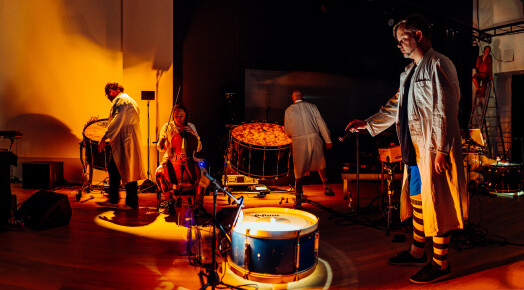 In American collegiate sports, the Fight Song is a time-honored tradition – a prideful, school-centered ritual – where fans cheer for their favorite teams in the form of song. Set in the far future of humanity, amidst a post-apocalyptic American-football-field-turned-laboratory, bio-engineers have detained Earth’s last remaining humans, studying their abilities and pleasures in order to perfect „the simulation.“ A ghostly marching band, unsettling cheerleaders, and handful of earthly subjects, wage an epic battle for the future of humanity in a world where machine sounds and stifling darkness prevail and where hope does not always assume the form of beauty. Despite the delectable sounds, an arm wrestling championship, a chaotic frat party, and a video game showdown, there is no escaping the imminent danger and overwhelming presence of something larger at-stake. Fight Songs was created by Popebama (Erin Rogers and Dennis Sullivan) and performed by Decoder and Popebama.

(if you are not seeing the English subtitles, please click on the CC icon to turn subtitles on, then click on the settings icon to change the language to English)